The Courier Business Briefings series is back and our session on April 7 will address the topic of “Leading Industry through the Brexit Minefield”.

The UK breaking away from the European Union is a decision of seismic proportions, the tremors of which will be felt within every single household and business in the land.

The starting gun will be fired on Brexit before the end of March as Theresa May moves to trigger Article 50.

The Courier is bringing together a panel of experts to debate what Brexit will mean for businesses large and small. 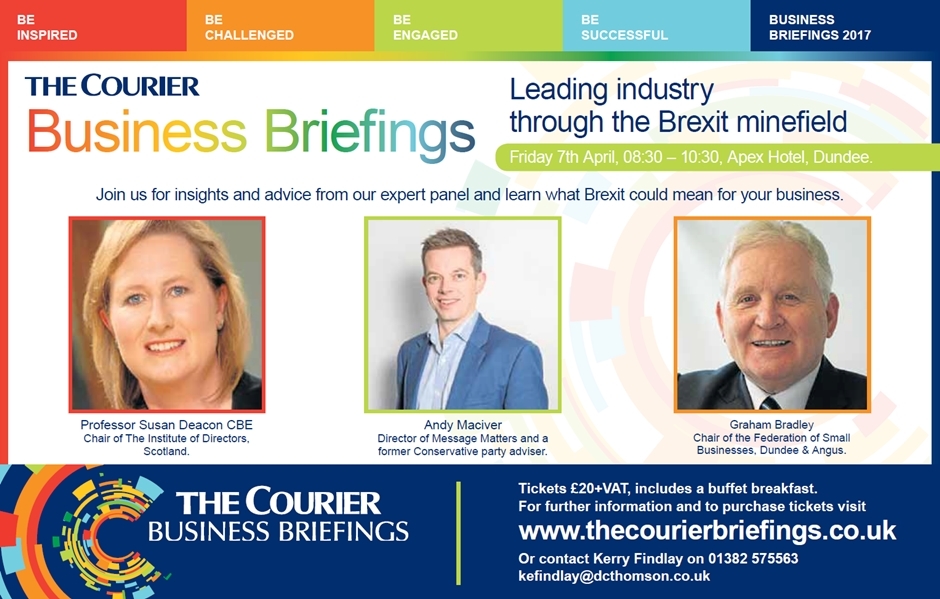 Professor Susan Deacon, chairwoman of the Institute of Directors in Scotland and a political front-bencher at the Scottish Parliament in a former life, will take to the stage for the breakfast event alongside Graham Bradley and Andy Maciver at Dundee’s Apex Hotel on April 7.

“In such changing and unpredictable circumstances, it can be hard to make sense of the world around us,” Professor Deacon said.

“But it is precisely at times like these that it is important for leaders to step up to the plate. Volatility and ambiguity also creates opportunity.

“Vacuums in decision-making and direction are spaces waiting to be filled.”

Mr Bradley is a respected businessman and chairman of the Dundee and Angus branch of the Federation of Small Businesses Scotland.

He has almost half a century experience in running a business in ever-changing political climes.

Mr Maciver is a former Conservative party adviser and a regular media commentator on political matters such as the proposed IndyRef2 and Brexit.

Mr Maciver – a director of Edinburgh consultancy Message Matters – will provide an impartial analysis of the Brexit situation, separating the “nonsense” from the “valid” points on all sides.

For more information and to book tickets, visit www.thecourierbriefings.co.uk.