Michael Alexander speaks to a Perth carol singer who has overcome mental health problems and a ‘dread’ of Christmas to feature prominently in a televised festive choir.

When Teenah Bee appears on TV screens belting out Christmas carols in the beautiful setting of the 15th century St John’s Kirk in Perth on Tuesday evening, she’ll be in her element as she and fellow members of the city’s Jambouree Choir help carry Scotland across midnight into Christmas morning.

The TV performance, recorded in November, is an early present ahead of her 29th birthday on Boxing Day when she and a friend will also be dueting in a Perth hotel.

But Christmas hasn’t always been a happy time of celebration for the 28-year-old who experienced a “rollercoaster” of a childhood.

Having recently been diagnosed with borderline personality disorder, she puts her adult mental health problems down to childhood “abandonment” issues and is keen to talk about how, since her teenage years, music has “saved” her from dark, sometimes suicidal, thoughts.

“I grew up in the foster care system from a young age,” the Perth-born singer who was “in and out” of foster care growing up told The Courier.

“My biological parents weren’t together. My mother couldn’t really look after us properly. We were put into care, then back living with her, then into care again. It was a bit of a rollercoaster…”

Teenah certainly experienced many ups and downs throughout her childhood. Attending three different primary schools in the Perthshire area, she found it hard to make friends. Her brother was adopted while her sister was sometimes in the same foster home as her and sometimes not.

“I used to dread Christmas as the adverts on TV showing happy families used to make me feel quite sad,” she recalled.

It was while she was at Perth High School, however, that she discovered music and “fell in love with it”.

“I was in school bands, orchestras. Then when I came to third year and choosing subjects I started singing and playing the trumpet. I just really enjoyed it and with that got the chance to tour Italy with another choir which was amazing.”

Teenah had to leave the youth choir at 18. However, that’s when she discovered the Jambouree Choir – an outfit formed in 2005 which welcomes everyone no matter what their musical ability and which currently has 30 members ranging in age from eight to 27, drawn from the Perth area.

Having recently been made redundant as a department store supervisor, her illness means that sometimes she has no motivation to leave the house and will spend days in bed.

“My diagnosis of borderline personality disorder is linked to abandonment issues as a child and undiagnosed depression,” she explained, adding that while she’s managing the condition now, it can be hard to maintain relationships as she worries people around her are going to “disappear”.

But when it comes to choir practice on a Thursday nights, that’s when she gets “this buzz”.

“The endorphins you get when singing are amazing,” she smiled.

“It’s something to go to every week. We are like a big dysfunctional family! It’s really good fun.

“To be around people who love to sing.

“For anyone that’s suffering from any kind of mental health problems, definitely music has changed my life and saved my life. It’s something quite wonderful actually!”

Teenah will be spending Christmas with her sister and nieces – and she’s looking forward to watching the Christmas Eve screening of the pre-recorded concert performance which includes her doing a solo verse of The Aye Carol.

Introduced by Sally Magnusson, six well known traditional carols, Once in Royal, Hark the Herald, O Come All Ye Faithful, See in Yonder Manger, As with Gladness and O Little Town of Bethlehem are sung by a large congregation gathered from all over Perthshire, accompanied by Alba Brass.

Other carols are sung by smaller choirs.

Chansons, a Perth based chamber choir, sing Tomorrow Shall Be My Dancing Day and two other songs.

The traditional Biblical accounts of the birth of Jesus along with modern meditations are read by school pupils from across Perth. 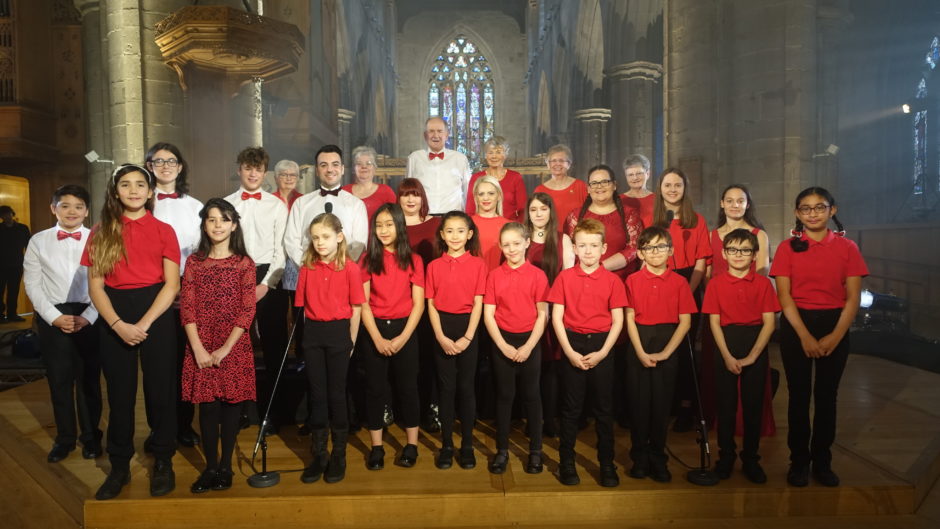 Edna Auld, founder of the Jamboree choir, said: “Teenah showed real musical and artistic ability from the time she went to secondary school both as a trumpeter and singer. Her singing voice gradually developed into beautifully mature soprano sound. She is outstandingly talented.”

David Strachan, Executive Producer at Tern TV, which has made Christmas Celebration, added: “It’s lovely to work with community choirs, but extra special to work with a choir of people like Teenah who have started from no experience and worked hard to get to such a high standard.  They took the song we asked them to sing and made it special.  It’s tough recording for two hours, but the commitment of the choir and the inspiration of Edna made it seem easy. “

*Christmas Celebration airs on BBC One Scotland from 11.40 pm to 12.25 am on Christmas Eve.

Another success story to emerge from the Jambouree Choir is Scottish tenor Liam Bonthrone.

He was born in Perth and is in his second year of postgraduate study at the Guildhall School of Music & Drama, under the tutelage of Robert Dean and Adrian Thompson.

Liam was previously at the Royal Conservatoire of Scotland, where he studied with Scott Johnson and won the Hugh S. Roberton Prize for Scottish Singing, the Leonie Kayser Prize and the Elgar/Spedding Lieder Duo Prize.

Liam attended Perth High School and was fortunate to receive free musical tuition as a member of the Perth Jambouree Singers.

He owes his musical inspiration and encouragement to the choir’s director Edna Auld, and his first singing teacher Fiona Brownsmith, who nurtured his voice and musical ear from the age of 11.

A community-based project, the choir performed almost every weekend at local events, and Edna was instrumental in pushing Liam to develop his stage presence, in capacity as compere.

She also encouraged him to accompany other singers on piano. Edna and Fiona guided his voice as it changed from a boy treble in to a young tenor voice, and eventually he was ready to audition for the Royal Conservatoire Undergraduate voice programme.

Alongside a classical singing career, Liam appears regularly in theatres across the UK as part of ‘The Two Highland Lads’, a Scottish variety performing duo, with baritone Kenneth Maciver (also a member of Jambouree), Leonard Brown and his All-Star Band.

He has since returned to his hometown of Perth to assist Edna Auld in the training of young voices in the choir, and to perform in charity fundraising concerts.

Liam is thankful for the generous support of a Dewar Arts Award, Help Musicians UK, the Goldsmiths and Behrens Foundations, The Caird Trust, and The Robertson Trust.