The broad-leaved woodland of Kennoway Den is a hidden gem, its peaceful trails well used by local people but tucked away from the rest of the world behind the village’s streets and houses.

Lurking in this secret glade are caves, an ancient bridge, an old well and remnants of bygone industries that relied on the flow of the Kennoway Burn to keep the wheels of commerce turning. 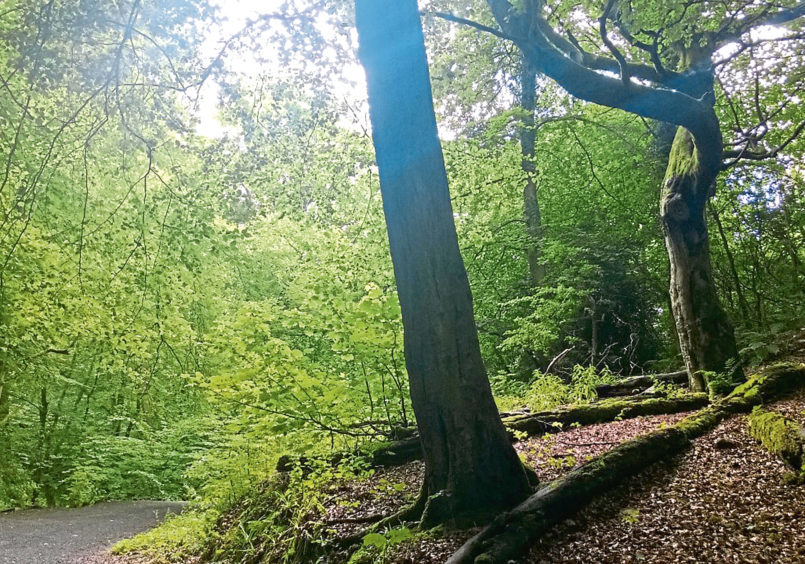 There are various ways into the den, but the best signed route is via Denhead, which branches off Kennoway’s main thoroughfare just north of the village centre, so I wandered this way after picking up some supplies from the local bakery to sustain me on my journey.

Branching left through a gap in the wall, a path dips into the valley, looping down past a lone cottage to the stream that would accompany me south.

In the 18th and 19th centuries, Kennoway Burn powered at least four mills, although the only clues to this once industrious scene that remain hidden in the undergrowth today are some sections of former sluices and lades. In its heyday, at either end of the den there was a corn mill and, in between, a sawmill and flax mill provided employment for villagers. 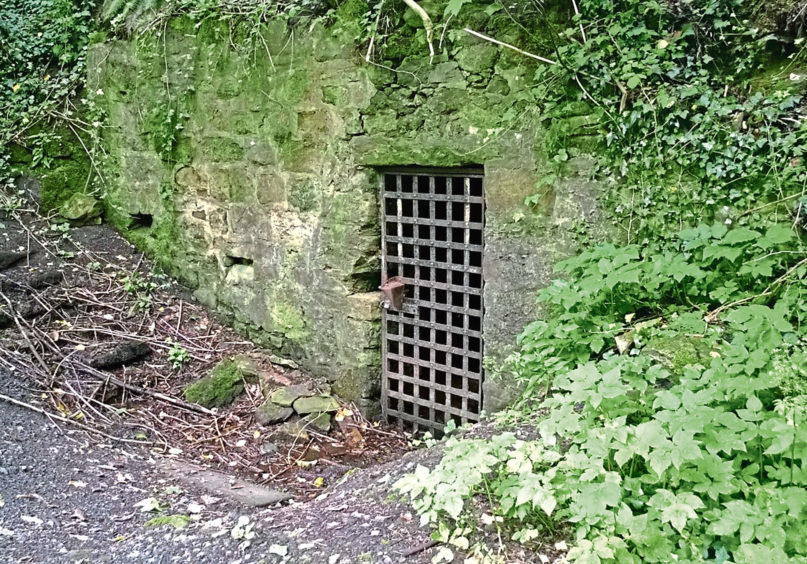 Better preserved is Caurdy Well, concealed behind a stone wall and heavy metal gate built into the slope, and, as I headed downstream below a canopy of elm, sycamore and beech, a simple stone footbridge dating from 1704.

Across the water, there are caves cut into the sandstone and, continuing south on the main path, the way passes bluffs of overhanging rock, one protruding outcrop of stone resembling a face.

Along the way, various bridges span the burn, but I stayed on the west bank, emerging from the trees briefly to skirt the edge of a field, before finally leaving the den by the site of the old King’s Mills. 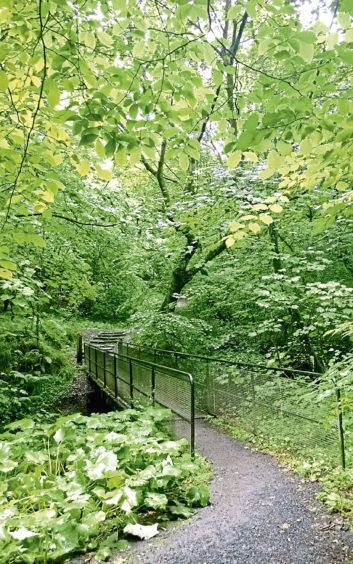 A brief trot along the road took me below a pylon line to the edge of the village where I turned west, pot-holed Fa-Latch Road passing scattered houses, steadings and pony paddocks to the hamlet of Balcurvie.

The route here follows part of a newly developed long-distance trail, the Fife Pilgrim Way, which, once complete, will run from Culross and North Queensferry via Dunfermline to St Andrews, connecting medieval landmarks, ecclesiastical sites and historic villages.

I trod in the footsteps of the pilgrims to a yard of wooden garages at the end of the lane, a track leading from here to a house aptly named The Temple where a right of way strikes out across farmland.

Forking right off the religious route, I hiked on between fields, spotting the Lomond Hills to the west as I dipped to cross Markinch Burn, before climbing past the wooded policies of Newton Hall, where Largo Law appeared across fields to the east.

A minor road led me back towards Kennoway and, while the rural byway is normally fairly quiet, the verge offers sanctuary from any oncoming vehicles, although particular care should be taken through the corner approaching Auchtermairnie Farm.

However, it is here, as traffic crosses Kennoway Burn, that walkers step off the asphalt and descend into the wilder northern section of the den, the path skirting between trees and fields before dropping below the canopy to meet the stream once again. 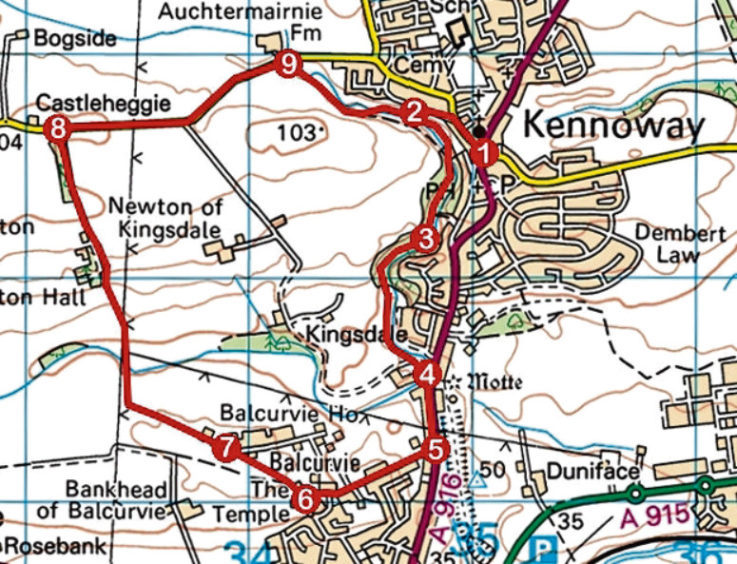 2. Turn left (signed Kennoway Den) and loop down past cottage. Go right, down steps, then left, following den path by stream, crossing at next bridge.

3. Fork left at waymarked junction beyond old bridge and follow path south to meet track. Turn left to A916.

6. Continue ahead on track to The Temple. Turn right up track then path to junction and fork right (signed Castleheggie).

7. Continue ahead on track then path, dipping to cross stream. Ascend track past Newton Hall to road.

Public transport: Kennoway is on Stagecoach bus routes 9A from Leven, 41 from Kirkcaldy and 41B from Cupar or Leven

Do you ken a way to hidden den?