The Met Office and Sepa issued weather warnings for almost all of Courier Country as the area was battered by thunderstorms.

The forecaster’s yellow weather warning for lightning was issued for much of the north of Scotland, including Dundee, Perthshire and most of Angus and Fife on Saturday afternoon.

The warning is in effect from 3pm until 10pm on Saturday.

Thunderstorms, complete with heavy rain, passed over Dundee in the late afternoon and again throughout the evening.

The storms were also reported in Perth, Fife and across Angus.

Power outages have been reported across Tayside with properties in the PH10, PH19, PH33, PH50, DD11, DD2, DD8 and DD2 postcodes said to be affected as of Saturday evening. SSE say they are working to restore power in all regions.

According to reports on Facebook, phone lines at Ninewells Hospital were also experiencing issues on Saturday evening, with the Birth in Dundee page warning expectant mothers to redirect any calls to a different number.

Important Message There is currently a problem with the telephone lines in Ninewells . If you have any concerns and need to speak with midwife overnight please call 01241 822537

Traffic Scotland has also warned motorists to be careful after the downpour caused dangerous driving conditions in the kingdom.

The organisation posted: “Drivers in Fife are advised to use caution due to surface water affecting driving conditions.”

Many took to social media to post about the weather.

My god, were getting some marble sized (that's NO exaggeration) pure white hail stones falling outside my house right now (Dysart, Fife) Along with torrential rain, thunder and lightning 😮 (video doesn't show it well, but by god this is wild) #scottishweather @BBCScotWeather pic.twitter.com/ZSgCuM1k3E

FT as thunder & lightning descends on Methil, it's East Fife 1-1 Dundee United. What did you make of it? | #DUFC pic.twitter.com/jRSM5fY239

Thunder and lightning have descended on Dundee ⛈

Some in the PH1 postcode in Perthshire were even left without water as a result of the thunderstorms.

Hi, we have just been made aware of no water in your area. Residents I have spoken with advised there was lightning in the area which has previously affected the pumps. We will get an engineer out there ASAP. Thanks ^Anna

Some short term loss of power or other utility services may occur and possibly some damage to some buildings and structures could be expected.

It says: “Locally heavy showers may affect the area during Saturday evening. There is a risk of localised flooding to low lying land and roads from surface water and small watercourses.”

The downpour caused significant flooding in parts of Dundee, including at the junction of Ralston Road and Dundee Road. 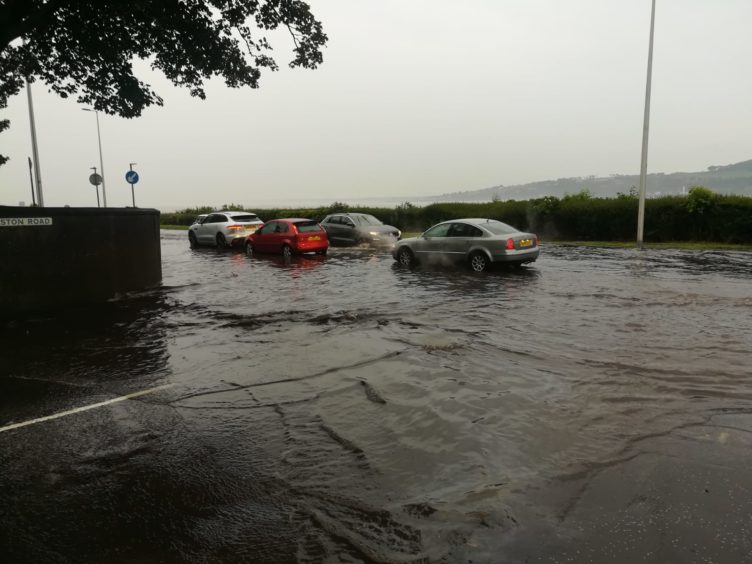 Do you have any photos or videos of the weather? Send them to online@thecourier.co.uk or message us on Facebook.