Three months of gas works are set to cause major traffic disruption in Perth city centre with motorists being warned of a number of road closures and restrictions. 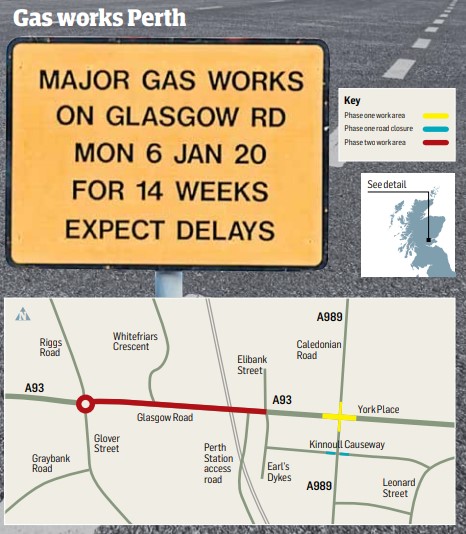 SGN is carrying out the work to replace old metal gas mains with new plastic pipes.

The works have been broken into two stages with the first phase lasting nine weeks and affecting the junction of York Place and Caledonian Road.

The gas company have said they will implement a four-way temporary traffic light system and will also close Kinnoull Causeway at its junction with Caledonian Road for an as-yet-unspecified period.

The second stage of the project is expected to last three weeks and will affect motorists using Glasgow Road and the main roundabout at Riggs Road and Glover Street with SGN installing another four-way temporary traffic light system.

Parking restrictions will also be in place in the surrounding area and there will be no right turn to Glasgow Road from Elibank Street and Perth station access road.

SGN say it planned the works after consultation with Perth and Kinross Council.

A spokesperson for the gas company said: “This essential work involves the replacement of old, metal gas mains with new plastic pipe to ensure a continued safe and reliable gas supply.

“After close consultation with the local authorities, our work will begin on Monday January 6 and last for approximately 12 weeks.

“Road closures will be in place for the duration of our project to allow our engineers to work safely.”

Engineers will be working on the project between 8am and 4pm seven days a week with SGN saying they were trying to minimise disruption for local residents.

An SGN spokesperson said: “We are mindful of those people who live in the area and will try to minimise noisy activities as much as we can.”