Boris Johnson looks set to defy expectations by retaining the majority of Conservative seats in Scotland, according to an exclusive general election poll for The Courier.

Research by Survation suggests the SNP will dominate today’s general election but not manage the clean sweep of Tory seats predicted in some quarters.

The result would be a boost to Mr Johnson’s hopes of securing a UK majority and getting Westminster approval for his Brexit deal.

It also means close-fought battles between the SNP and the Conservatives in seats like Angus, Perth and North Perthshire and Ochil and South Perthshire.

Survation polled more than 1,000 Scots by phone during the last 36 hours of the campaign and found support for the Conservatives is largely unchanged from the 29% they achieved two years ago.

The poll predicts 28% of Scots will vote Tory, just months after Ruth Davidson plunged the party into chaos by quitting the leadership. Ms Davidson stood down in August amid rumours she feared the prospect of Brexit-backing Mr Johnson as prime minister would damage her chances in Scotland.

However, the SNP has increased support since its disappointing result in 2017.

In another boost for Nicola Sturgeon, the poll suggests independence is now supported by close to half of all Scots.

The nationalists also look set to pick up a raft of seats from Scottish Labour, which appears to have dropped support since 2017. 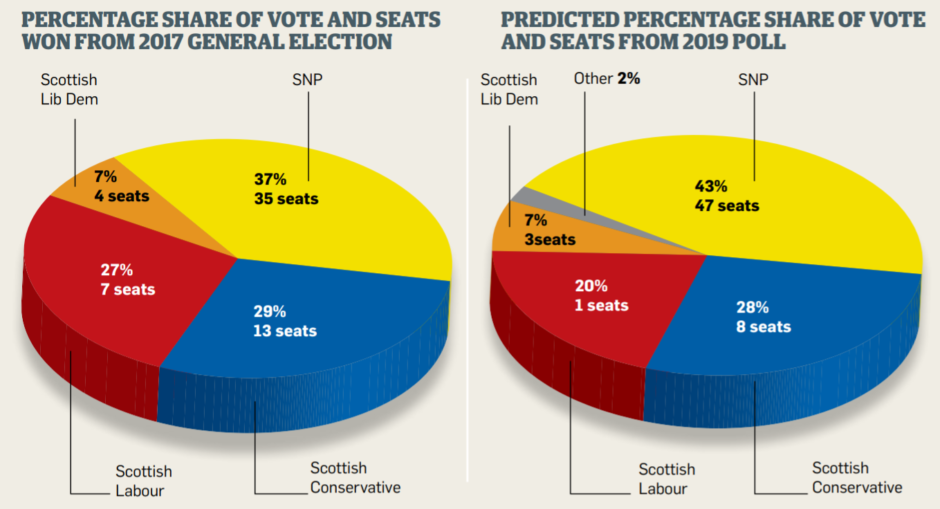 Meanwhile, Scottish Labour is on just 20%, down from its 27% two years ago.

Follow live coverage of the results from 10pm and through the night at www.thecourier.co.uk

Analysts have warned it is difficult to precisely forecast how the seats will fall because of the very narrow margins in most of Scotland’s 59 constituencies.

This is particularly true in North East Fife, where the SNP is defending a majority of just two votes against the Lib Dems.

However, polling expert Professor Sir John Curtice said a uniform swing across the country would see the SNP finishing on 47, up 12 from 2017.

The Tories would win eight seats, the Lib Dems would drop one to three and Labour would again be left with a solitary MP north of the border.

Professor Curtice said: “It looks as though the election will affirm and strengthen the SNP’s dominance of Scottish politics and embolden the party in its demands for a second independence referendum. This is especially given this poll affirms previous polling that indicates support for independence is now close to the 50% mark.

“Even so, support for the Conservatives is almost back to the level it enjoyed in 2017, thanks not least to its ability to secure the support of over half of all those who voted Leave in 2016.

“The party should retain a fair number of the gains it made in 2017, despite the nationalist advance.

“In contrast, Labour are at risk of seeing all the gains the party made in 2017 reversed, raising fresh questions about the party’s long-term future north of the border.”

Leaders of the main parties yesterday engaged in a frantic last drive for votes.

UK-wide opinion polls suggested that while the Conservatives remain in front, they are still not guaranteed an overall majority in the new parliament.

The prime minister’s day got off to a bumpy start as he was accused of “hiding” in a fridge on live TV to avoid a reporter pressing him for an interview on ITV’s Good Morning Britain.

Labour leader Jeremy Corbyn started his last day of campaigning in Govan in Glasgow with a promise of “real hope” for voters affected by years of austerity.

Meanwhile, Liberal Democrat leader Jo Swinson concentrated her efforts on the area around London and Surrey where the party is hoping to pick up seats.