A Perthshire teenager has overcome serious health issues to pursue her dream of becoming a professional ballet dancer.

Errin Godwin Whalley, 17, from Pitlochry, has gained a place at Ballet West, one of Scotland’s most prestigious classical full-time ballet schools.

For the Breadalbane Academy pupil the achievement is even more remarkable as a few years ago she was diagnosed with a condition called Multiple Pituitary Hormone Deficiency and she stopped growing and lost energy.

“When others were going off to ballet school at 11 she was in hospital seeing consultants,” said her mother Myette Whalley.

“She also missed a great deal of school so had to catch up academically.

“With medical help and sheer hard work she gained the strength and techniques needed to become a ballet dancer. 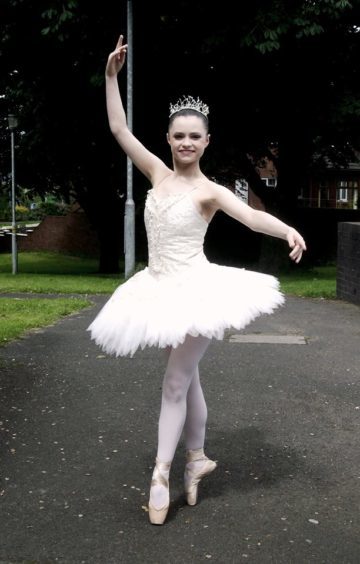 “She has also succeeded academically at school and although still small, has grown to an adult height.”

Dancers from Ballet West have gone on to dance with major ballet companies both nationally and internationally, and students have been BBC young dancer and Genée international ballet competition finalists.

Errin will start the three year BA (Hons) degree course at Taynuilt near Oban in September.

“She has worked extremely hard to gain this place, with great determination and at present travels every day after school for ballet classes around Scotland and sometimes further,” said Mrs Whalley.

Errin’s family are all in theatre and her earliest memories are standing at the side of the stage watching productions but she now faces a financial struggle to pursue her dream.

Ballet West is not fully funded by the Scottish Awards Agency and she needs to raise £9,000 a year.

Errin has gained more than £2,000 through donations and a successful Crowdfunding campaign which ends on March 10.

“She deserves this place because of the fight to overcome her health issues and her determination to succeed in ballet and academically,” said Mrs Whalley.

Anyone who can help can contact the family at mmwhalley@btinternet.com through Errin’s Facebook page or donate through the Crowdfunder Errin’s ballet school fees.

They are also encouraging people to write to their MP or MSP to change the situation regarding the funding of private colleges in Scotland.