As he celebrates the launch of his 23rd recipe book, Antonio Carluccio welcomes Keeley Bolger into his home to chew the fat about Vegetables, his dislike of angry chefs and why there’s nothing wrong with a biscuit or two.

Antonio Carluccio’s home is brimming with personal touches, and as he shows me around, it isn’t long before even the most innocuous item prompts a trickle of anecdotes.

“Those grapes out there are from a cutting I brought to London 41 years ago,” the 79-year-old declares proudly, gesturing towards a branch heavy with black fruit, which I’m encouraged to try and informed it’ll be used for making wine later.

Then there’s the pot of quince jam he presses into my hands and explains was made yesterday with fruit fresh from his garden, the stacks of notes for his first children’s book (about two mushrooms), and his friendly dachshund who doubles up as a foot warmer, and whose likeness was captured by a fan in a wooden chopping board, hand-crafted for the Italian cook’s last birthday.

It’s a homely house, full of rustic paintings, photographs, cushions and books, and just like the man himself, not ostentatious.

“I like to have money, because money is good,” he says, crinkling his eyes. “But it’s not too good, you know?

“If you have enough, it’s fine. It solves many, many problems, but there are people that are avidly attached to it. It’s balance. My mother used to say, when God created Italy and looked from above, he said, ‘It’s too beautiful, I have to balance it and create Italians!'”

Brought up in the country’s north-west region, one of six children, Carluccio briefly worked as a journalist in Turin before moving to Vienna and then Germany, and eventually to London to work as a wine merchant, before devoting himself to food with the opening of his Neal Street Restaurant in 1981, followed by the first Carluccio’s Caffe in 1998.

Although he’s since sold his interest in the now famous restaurant chain, he’s still involved from a distance, and clearly proud of its success, using a mosaic from the restaurant as his doorstep and sealing his home-made jam with a Carluccio’s stamp.

Next on the menu is his new book, Vegetables, within which roots and greens take the glory (although some meat and fish dishes are included) – and that’s before we talk about his upcoming TV series in Australia.

“Italians love vegetables as much as they love meat or fish, there’s no difference,” he notes.

It’s easy to draw the conclusion that this is a man who knows how to live well.

“I am not a monk, don’t misunderstand me, never would be a monk,” he retorts. “I’m a humanist, so that means I like human beings. I like to be with them. I like to discuss with them.”

And with his hands resting on a newspaper, he’s eager to discuss what he believes are overly strict restrictions on civil liberties, such as the recent call for a ban on offering biscuits with hot drinks in cafes.

“They forbid the biscuits with the coffee because it’s too fattening,” he explains with a sigh, pointing at the plate of tempting biscotti he’s laid out to nibble on with our coffees.

“You can’t just deny people something like this. Let him do it, but let him do it responsibly. Teach them. No, it’s all, ‘Stop, stop. No, no, no’. And it’s no good… it’s just indoctrination.

“Indoctrination because you really believe that your citizens are stupid.”

While he takes food seriously – and is clearly chuffed with Vegetables, his 23rd cook book – he’s not fond of aggressive chefs.

“I respect very much Raymond Blanc for what he does, Giorgio Locatelli, Brian Turner, Pierre Koffmann, Marco Pierre White, but not Gordon Ramsay. I don’t like him,” he says. 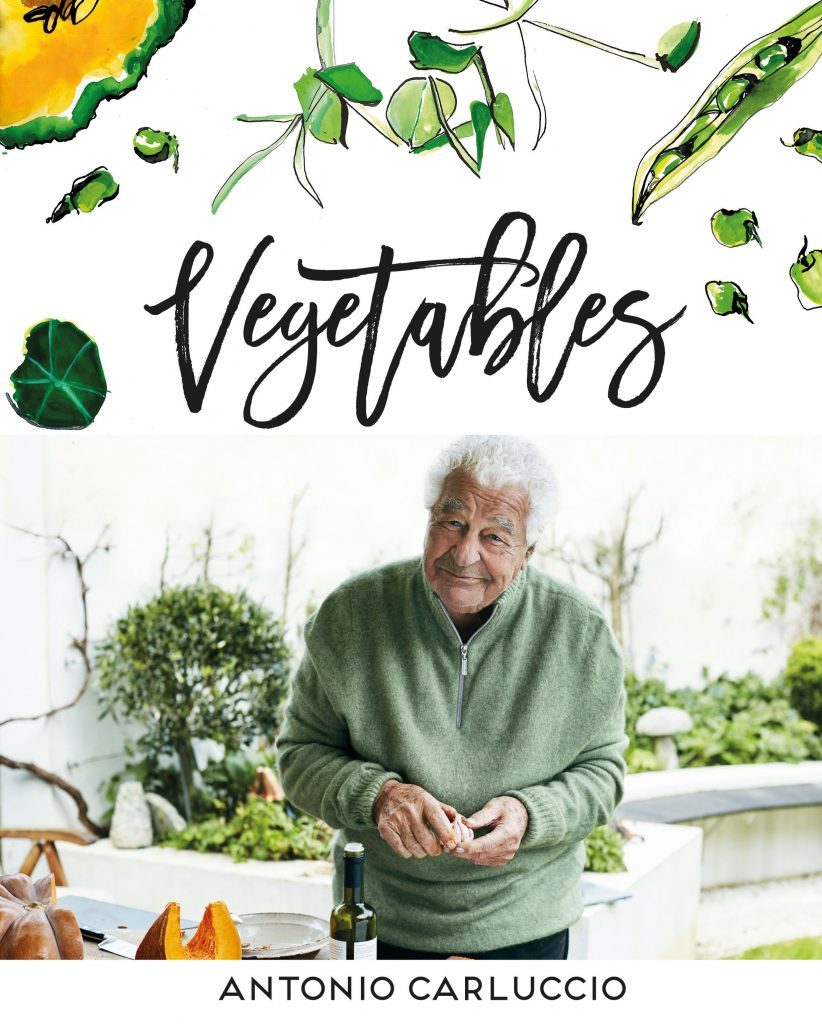 “Not even his cooking, he’s just pretentious. The very fact that he has to swear, and to bring a regime in the kitchen. They are not military. Come on! You achieve much more in a lovely atmosphere.”

With frequent marriage proposals from fans, a string of celebrity devotees (not least Jamie Oliver) and a real pride in hospitality, it’s hard to imagine Carluccio bawling someone out for not reaching his standards.

Fancy bringing a bit of Carluccio’s homeliness into your own kitchen? Here are three delicious recipes from Vegetables to get going with… 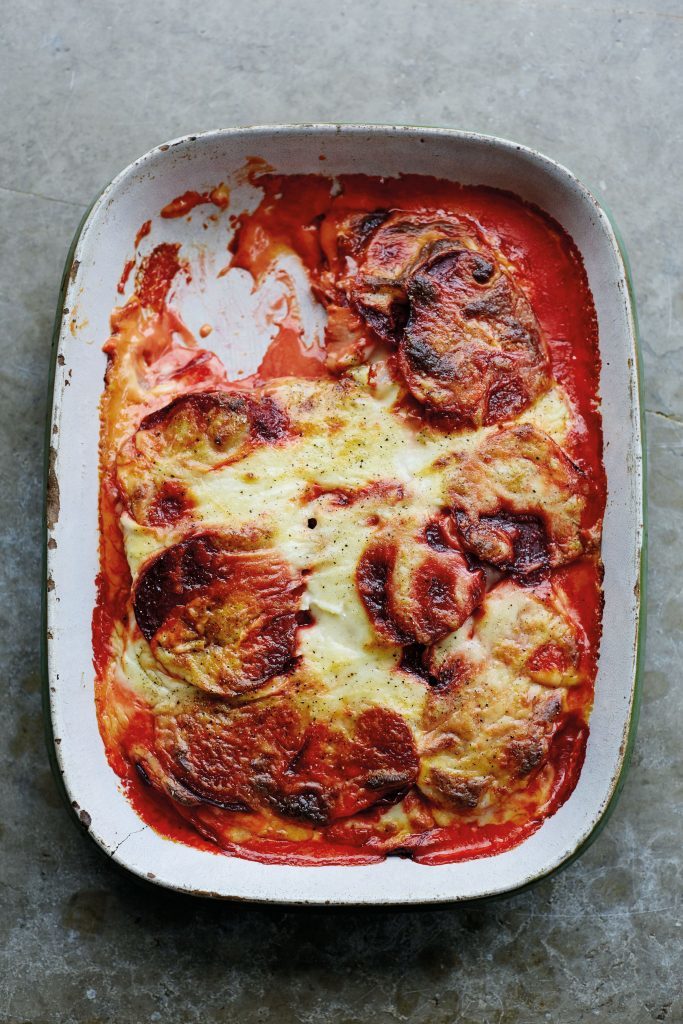 For the spicy cheese sauce:

A pinch of chilli powder

Boil the beetroot in slightly salted water for one and a half hours, until the centre is soft.

Make the sauce. Melt the butter in a medium saucepan, then add the flour, and stir to amalgamate the flour with the melted butter. Add the warm milk slowly, stirring constantly to avoid lumps, until the sauce is thick. Add 80g of the Parmesan, some nutmeg, chilli powder, salt and pepper to taste.

Peel the cooked beetroot and cut into thin slices. In an ovenproof dish, build a layer of beetroot, followed by a layer of ham, then cover with some of the sauce. Build up these layers until you finish the ingredients, ending with the remainder of the sauce on top. Add a final sprinkle of the remaining Parmesan and black pepper.

Bake in the preheated oven for 35 minutes and serve hot. 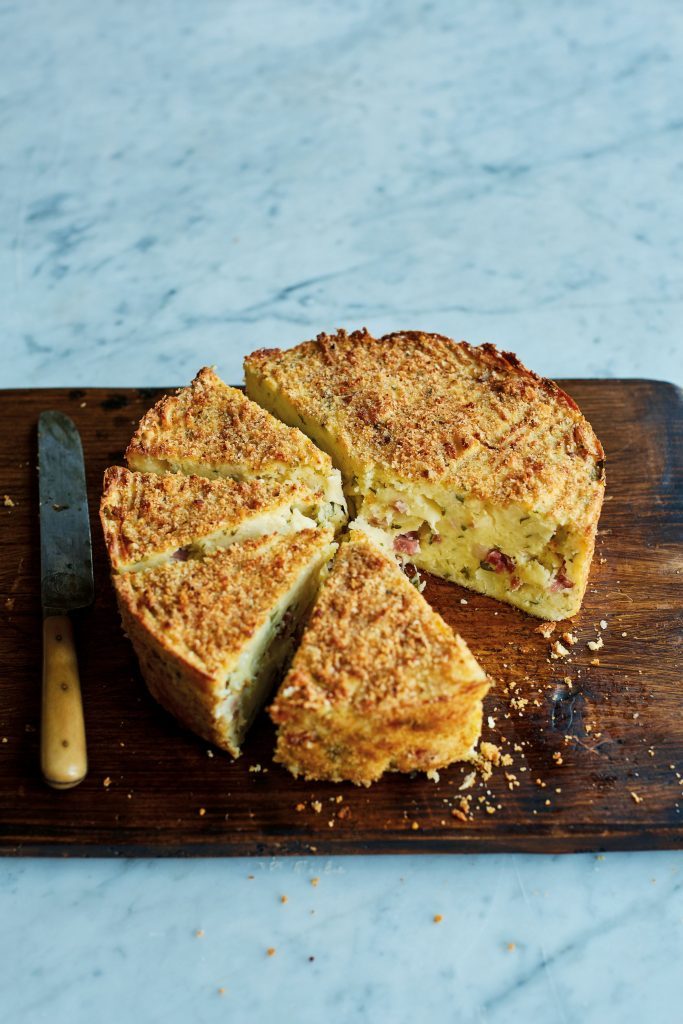 A knob of unsalted butter

Boil the potatoes in salted water until tender, then drain and peel them. Pass them through a potato ricer (or sieve) to make a puree. Mix the potato puree with the ham, mozzarella, Provola, Parmesan, beaten eggs, parsley and some salt and pepper.

Use the butter to grease a round cake tin 25cm in diameter, and dust with some of the breadcrumbs. Spoon the potato mixture into this, and press gently with a fork to give some shape. Sprinkle with the remaining breadcrumbs, then trickle over the olive oil.

Bake in the preheated oven for 35-40 minutes, until browned on top. Serve in slices. The cake is very good warm, but also excellent cold. 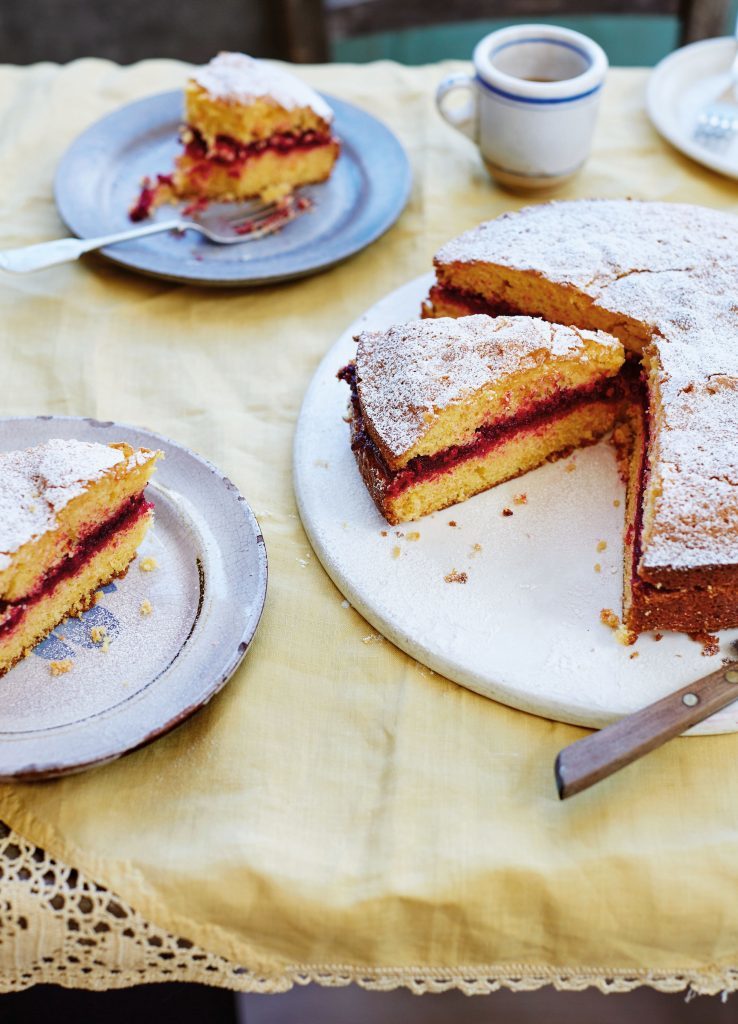 To finish and serve:

A jam of choice

Preheat the oven to 150C. Use a little butter to grease a round 30cm cake tin.

When cooled a little, whiz the carrots in a blender with the olive oil and egg yolks. Spoon the puree into a bowl, and fold in the sugar, sifted flour and baking powder.

Separately, in a clean bowl, whisk the egg whites until stiff. Using a metal spoon, carefully fold the egg whites into the carrot mixture – you don’t want to lose the air in the whites.

Pour the mixture into the prepared baking tin, and bake for 40-45 minutes. Leave to cool in the tin, then turn out on to a wire cooling rack. Leave until completely cold.

To fill, if you like, cut the cake in half horizontally, using a long, very sharp knife. Spread jam over the bottom half, and top with the top half. Chill for 30 minutes or so before serving, dusted with a little icing sugar.

:: Vegetables by Antonio Carluccio is published in hardback by Quadrille, priced £25. Available now

THREE OF THE BEST… Dried fruit and veg 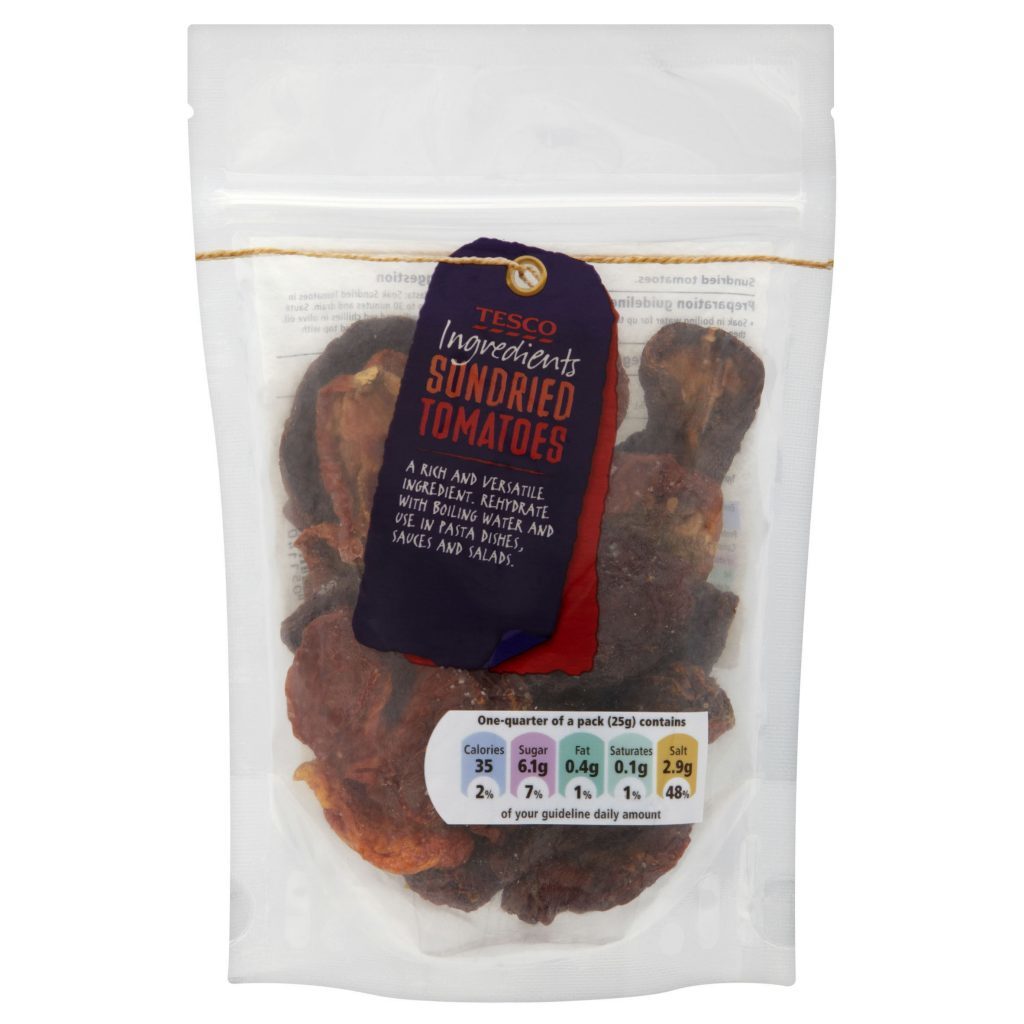 When fresh tomatoes are in short supply, these tangy toms help lift winter salads and ragus. Even better, dice them up and fold into home-made focaccias for a dash of sweetness. 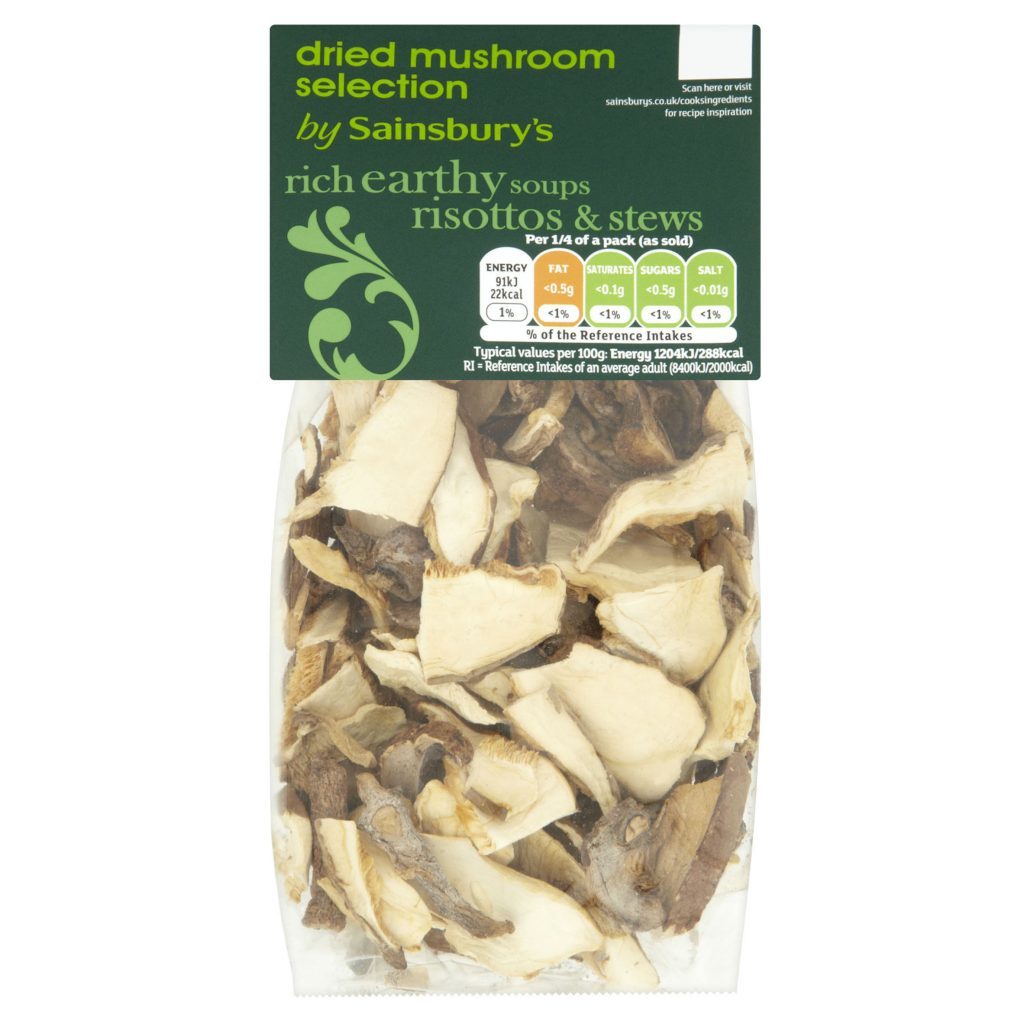 Once rehydrated and steeped in hot water, these mushrooms really add a tasty depth to risottos and winter stews. 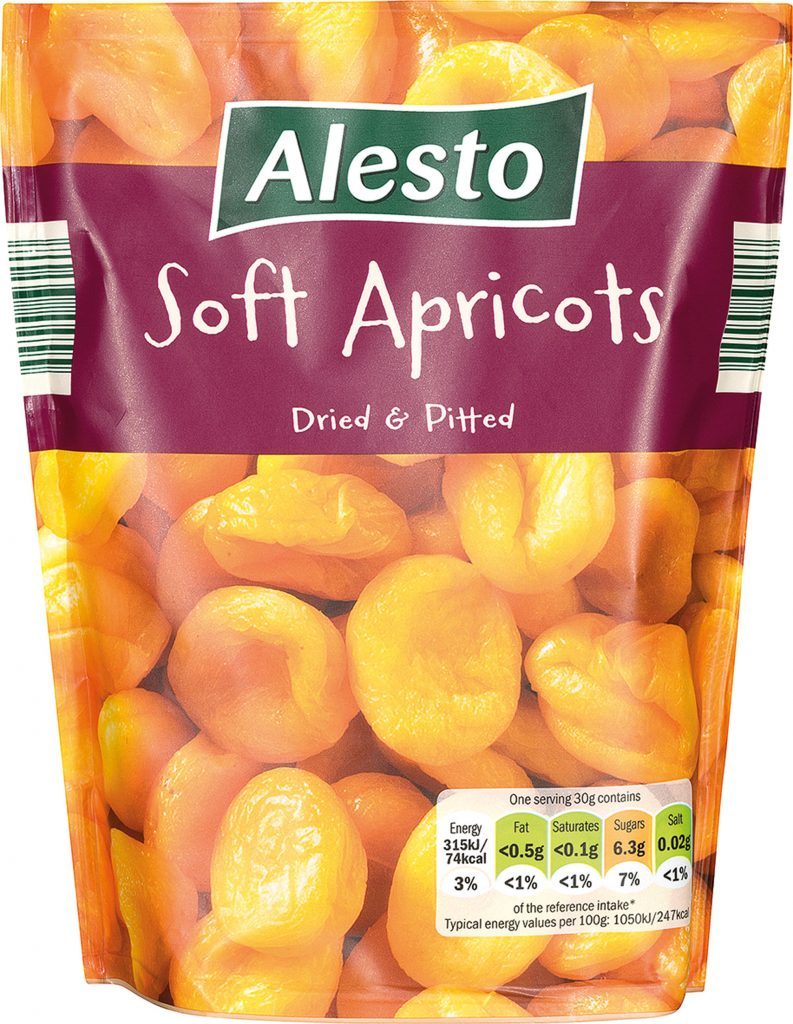 These soft, juicy fruits are the ideal accompaniment to curries and hearty tagine dishes, or simply for snacking on.