It might still be more than a month until Santa visits, but hundreds of Dundee residents still decked the streets for the annual Christmas lights switch-on.

Revellers packed out the festive market in City Square from 9am on Saturday, which featured crafts, food and drink stalls from local suppliers and companies.

Entertainment was provided at multiple points in the city centre, including from a stage outside the Caird Hall and a silent disco, which saw people don headphones in order to dance along to their favourite Christmas songs without causing a public noise complaint.

The evening was compered by Wave FM morning presenters Ali and Andy.

After the lights were turned on by Santa and his trusty assistant – Depute Lord Provost Bill Campbell – attendees danced in the streets at one of the largest ever ceilidhs held in the city centre.

DC Thomson’s Meadowside building was lit up with images from its famous comics, including the Bash Street Kids, Dennis the Menace and Minnie the Minx, during the festivities.

A torchlight procession led by samba drummers and brass instruments saw hundreds march down Reform Street from the McManus to City Square prior to the big switch-on.

Saturday’s event marked the beginning of more than four weeks’ worth of Christmas entertainment in Dundee.

This Saturday, a number of Christmas fairs will be set up, including at the Dundee Carers Centre and the Five Ways Club.

A festive themed crafts fair will be held in Wasps art studio on December 1, while on the same date, the Dundee International Women’s Centre at Manhattan Works will host a Christmas market complete with a street food stall and Santa’s grotto. 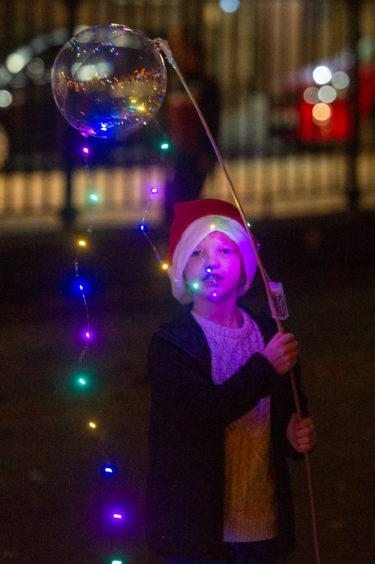 VIDEO: Dundee gets in the festive spirit as hundreds attend Christmas lights switch-on