As the UK’s new £3.1 billion aircraft carrier HMS Queen Elizabeth docks at its home port of Portsmouth for the first time after undergoing extensive sea trials, Michael Alexander looks back at the scale of the project which saw the vessel set sail  from Rosyth at the end of June.

When Britain’s biggest ever warship set sail for the first time on June 26 after nearly a decade of construction, she had one significant hurdle to overcome before she could start policing the seas – she had to squeeze under the Forth bridges with just six feet to spare!

All eyes were on Chief Petty Officer Andrew Vercoe as he steered the £3.1 billion aircraft carrier HMS Queen Elizabeth out of the dock at Rosyth and into the North Sea in a nerve-racking 10-hour operation.

The manoeuvring of the 932 feet-long vessel was aided by 11 tug boats and two pilots on the shore, and the 65,000-ton giant had just 14 inches to spare on each side.

From there, the 733-strong crew had to wait for low tide and the perfect wind conditions before it could pass under the three bridges in the River Forth – a process that had been simulated some 30-times.

As the carrier approached the final crossing, the 127-year-old Forth Bridge, the ship’s captain Commodore Jerry Kyd was even expected to have to resort to using a sextant – a navigation tool used in the 18th century – to get his measurements correct.

It was after midnight before the ship made the final passage under the bridge. With the warship’s mast-topping radar bent at 60 degrees, she was able to glide under with just over six feet to spare.

Over the summer, the ship has been undergoing sea trials off the Scottish coast and sailed with the USS George HW Bush and her carrier strike group, during Exercise Saxon Warrior earlier this month.

More than six weeks on, however, and the 65,000 tonne vessel, which faced delays over the years and is said to be over budget, has now arrived for the first time at Portsmouth where extensive preparations have been made for her arrival, including the dredging of 3.2m cubic metres of sediment from the harbour.

The carrier cannot currently deploy planes but flying trials are due to begin next year.

However, packed with technology, the plan is for it to boast 24 of the world’s most advanced stealth fighter jets – F-35B Lightning fighter jets are due to make their first trial flights from the carrier’s deck next year with 120 aircrew currently training in the US.

The carrier, along with its sister ship HMS Prince of Wales, is expected to be the backbone of Allied air power for the next 50 years.

Commodore Kyd, who was the commanding officer of HMS Illustrious which was decommissioned in 2014 after 32 years in service, said he felt a “huge amount of pride” ahead of the vessel berthing in its home port.

He said: “It sends the right signals to our allies and indeed potentially to our enemies that we mean business.

“The armed forces are fundamentally an insurance policy for the country and you can’t just, at the flick of a switch, decide that you need these capabilities.”

Commodore Kydd calls it a “seabase” that would enable Britain to pack a “serious punch” and be used in disaster relief, humanitarian assistance, defence and selling British industry abroad.

He added: “It is a fantastic backdrop to all that is good about the country and this is why it is a national symbol, and not just military power projection, but also about British ambition, about being a globally outward facing country.”

But it has also been a great advert for the work of the Babcock engineers and other work teams who have been working at Rosyth fitting it together.

“She is built by the best, crewed by the best and will deliver for Britain.

“For the next 50 years she will deploy around the world, demonstrating British power and our commitment to confronting the emerging challenges from a dangerous world. The whole country can be proud of this national achievement.”

Three years after she was officially named by The Queen, the future flagship embarked upon sea trials to monitor speed, manoeuvrability, power and propulsion as well as undertake weapons trials and additional tests on her levels of readiness.

Admiral Sir Philip Jones First Sea Lord and Chief of Naval Staff said:“This is a hugely significant moment for the Royal Navy, for all our armed forces and for our island nation.

“Once in service HMS Queen Elizabeth will be the largest aircraft carrier in the world outside the United States, and the first designed from the outset to operate a fifth generation aircraft.

“Already this ship represents the best of the UK’s industrial and engineering expertise, and once in service she will symbolise our military power and authority in the world for decades to come.

“There is still much work to do between now and then, but be in no doubt: a new era of British maritime power is about to begin.” 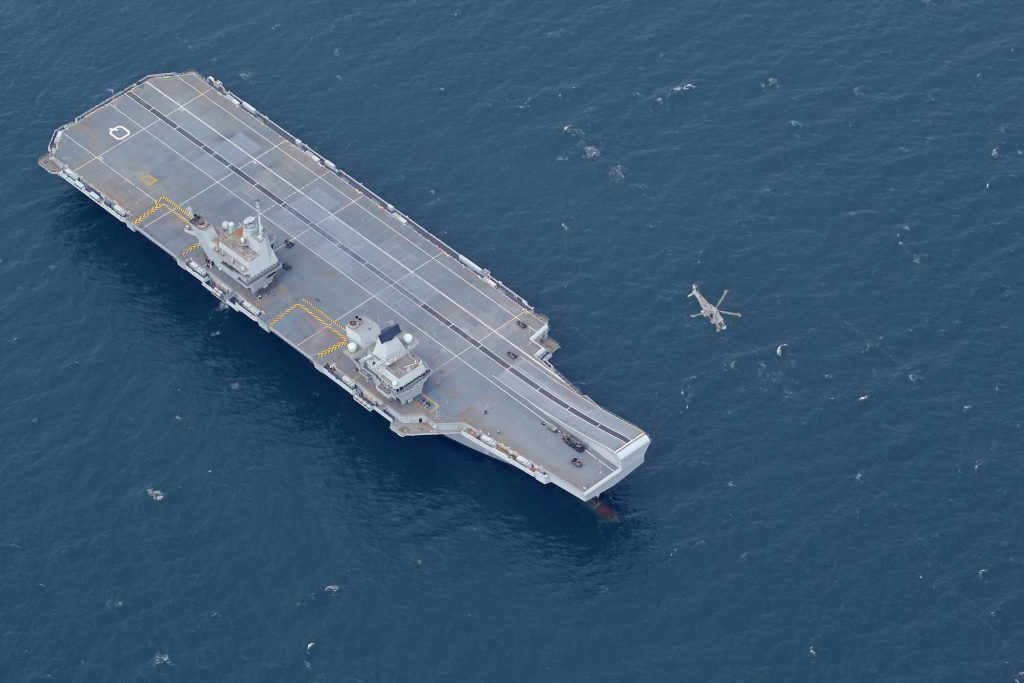 HMS Queen Elizabeth is the largest and most powerful warship ever constructed for the Royal Navy.

The ship will operate with a crew of approximately 700, increasing to the full complement of 1,600 when aircraft are in operation.

The ship’s company moved on board in early June. Working alongside industry colleagues, they have been familiarising themselves with the new ship and the high tech systems on board as well as undergoing training.

“The departure of HMS Queen Elizabeth marks an exciting stage in the programme and is the first real opportunity to put the carrier’s outstanding capability to the test, demonstrating the best of British engineering and manufacturing.”

HMS Queen Elizabeth’s sister ship, HMS Prince of Wales is structurally complete and is currently in the outfitting phase of her programme.

The aircraft carriers HMS Queen Elizabeth and HMS Prince of Wales are being delivered by the Aircraft Carrier Alliance, a unique partnering relationship between BAE Systems, Thales UK, Babcock and the Ministry of Defence.

At its peak the programme directly employed 10,000 people across six build yards.

While manufacturing and commissioning is now solely focused in Rosyth, the skilled and diverse workforce is sourced from across the country.

Made in Fife: The story of the £3.1 billion aircraft carrier HMS Queen Elizabeth