Voters go to the polls on December 12 to elect a new UK Government. The Courier profiles the local election battles.

In a similar vein to its eastern neighbour, the constituency of Dundee West has only ever been represented by two parties – Labour and the SNP.

It was not until Chris Law, who toured the country with his spirit of independence bus during the referendum in 2014, crashed the party in 2015 did it change hands for the first time.

Until then, the seat had solely been occupied by Labour members, since its inception in 1950.

Chris Law swept to victory in 2015 during the so-called Night of the Long SgianDubhs, taking more than 61% of the vote share.

At the snap election in 2017, his share was cut by more than 15%, but he still enjoyed a majority of more than 5,000 – which in Courier Country is quite high.

Like Dundee East, there are pockets of severe deprivation in the constituency. People who have grown up in Lochee have a life expectancy of a decade less than those who live and grow up in Broughty Ferry – seven miles away.

We asked candidates how they would make sure the gap between the most deprived and less deprived could be shortened and how they would shout for the city as a whole if returned to Westminster. 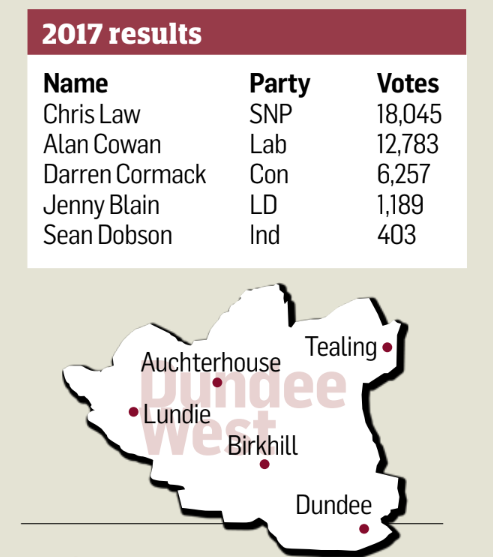 We must acknowledge the existence of a strong union and rise above our fears and divisions. I am going to act immediately to push for reforms in child health in all policies, including women’s health during and after pregnancy, elderly, tobacco control, obesity and mental health. I believe it is important to put a cap on out of pocket costs of meds and hold pharmaceutical companies accountable, regulate how much these companies are putting on R&D and not just exporting profits. Job creation and educational reforms will be prioritised. Together we can cause a revolutionary change through partnership, participation, perseverance and prayers.

As MP for Dundee West, it will be my priority to put the voices of local people at the heart of the job I undertake to represent everyone in the constituency. I will make every effort to consult with residents through weekly surgeries and monthly walkabouts around the constituency. That way, I can hear what is affecting people and what they want done. I will also use my time in parliament to speak up for Dundee West, holding the government to account and raising local matters with government ministers. It is vital that Dundee West’s MP helps to bring to our city more jobs and funding for vital services and these will be priorities for me.

Tackling inequality is a key priority for the SNP. We have made tremendous progress in recent years by closing the attainment gap, using new social security powers to increase Carer’s Allowance, protecting disability benefits and mitigating the worst impacts of Tory welfare cuts. Despite these successes, uncertainty caused by the Brexit mess has made addressing these challenges more difficult. Families on low incomes can’t afford more years of a Tory government determined to impose a damaging Brexit on Scotland. A vote for the SNP is a vote to escape Brexit and put Scotland’s future in Scotland’s hands.

I believe that I am the person who can bring the citizens of the city closer together. I believe that the climate emergency should be the wake-up call for all politicians to restructure our economy through a “green revolution” with investment in new technologies bringing a “green industrial hub” to Dundee as promised by a Labour government, new apprenticeships and full rights from day one for all workers. May I take this opportunity to assure everyone that I will not be Westminster’s voice in Dundee I will be Dundee’s voice in Westminster. Vote Malone for Dundee West.

Mr Waiton focused on Brexit, saying: The Scottish Government is undermining democracy by refusing to accept the Brexit vote. The Scottish people voted to remain in the UK and then as part of the UK the Brexit vote won the day. Today, the campaign against Brexit is contemptuous of the electorate and is a threat to democracy. Whether it takes the form of patronising the electorate or criminalising parents who dare to lightly smack their child, or undermining our right to freedom of speech, the political class have become aloof and elitist.

There is multiple deprivation in Dundee which is not just about being poor or wealthy. It is about equality of opportunity which the SNP council, SNP Scottish Government, SNP MSPs and SNP MPs – the one party state of Dundee – has failed to address for over a decade. I welcome the Tay Cities Deal and am keen to support Westminster/Holyrood projects of this kind ie investment in supporting Dundee Airport and guaranteeing the London air link. I will press for a Waterfront Development “social dividend” so that the millions invested in the waterfront bring a return for all in Dundee.

ASDA Is Launching Its First Ever Food Refill Station

As part of a new initiative to encourage shoppers to reuse and recycle, supermarket giant ASDA will be launching its first ever refill station.